Next Update is the company behind Sifter. We're a small fun-loving company that's obsessive about making work a little less tedious and, ideally, a whole lot more fun.

Sifter is a hosted bug and issue tracking application focused on making work less tedious. It's our only product, and it receives our undivided attention. 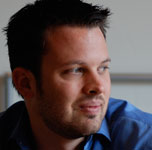 Garrett is a software developer resigned to the lonely charge of summoning cool stuff with scraps of code. That's okay with him. He is the light and might behind Sifter, dedicated to the simplification of bug and issue tracking, and he believes that if the Web were less sticky, fewer of us would get stuck. When he's not developing, he's designing, and when he's not designing, he's developing a reputation for catching net in pick-up basketball games. If you ask nicely, he might send you a postcard the next time he's snowboarding. No promises. Garrett lives and works in Texas, but yearns to dwell in the Colorado, where salmon-stuffed bears make snow angels beneath storybook mountain skies. 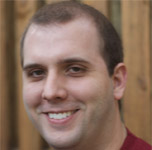 Adam is one of the primary developers behind Sifter. He also manages the support queue from time to time.

Adam is a software developer and writer who lives in and about Dallas in the great state of Texas. When not coding or writing, Adam spends his time being a sucker for animals, an amateur humorist, an arbitrator of what is geek-chic and an aspiring erudite. 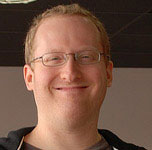 Keith and Garrett have worked together for almost ten years, and for most of that time Keith listened to Garrett wax philosophically about how to build a different kind of bug tracker. But it wasn't until Garrett told him about his thoughts of quitting his job and building that bug tracker that Keith knew he was serious. So Keith put up some seed money, handled some of the logistics, and the business was up and running.

Keith isn't involved in day-to-day operations, but he does help manage the other logistical aspects of running a business so that everyone else can keep their heads down and improve Sifter. For his day job, Keith runs a user-experience consulting company based in Dallas. 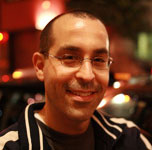 Dan serves as an advisor and has been involved with Sifter since some of the early prototypes. Providing years of knowledge and experience, Dan helps keep Sifter on track. With a strong focus on user experience, he's been creating software, managing teams and projects, writing, speaking, and developing businesses for over 16 years. He's become known for the insight and tutorials on Hivelogic, his talks at technology conferences, and for creating several large scale content management systems (such as the A List Apart CMS). Dan also co-created Cork'd, the web's first online community for wine aficionados (acquired by Gary Vaynerchuk's Wine Library).

Dan's goal is to work with Next Update by sharing his development knowledge and approach, business perspective, management skills, and emphasis on user experience.